The Beast Is Currently Being Broken In 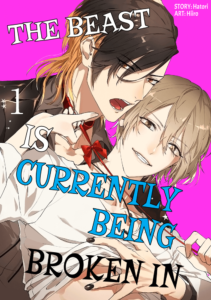 This is the spiciest of pure love stories you’ll ever find, and it’s about a popular and beastly club host and a ”queen” who preys on hetero men. Nagatora works as a club host and despite the carnivorous look in his eyes, he hates women and has no desire to bed them. Since his job forces him to pimp himself off to his female clients, his days are full of stress… But, when he tells all this to his hairstylist, Reina, the delicate and pretty young man turns into a wolf! He asks Nagatora, ”Then, why don’t you try men?” and forces him into a motel! Nagatora thinks there’s no way he can get hard with a guy… but Reina ends up commenting, ”You said you had no desires at all, but you’re just as wild in bed as you look!” When Nagatora saw Reina mount him and thrust his hips with reckless abandon, Nagatora’s inner desires came to life and he became so much of a beast that he even surprised himself…!